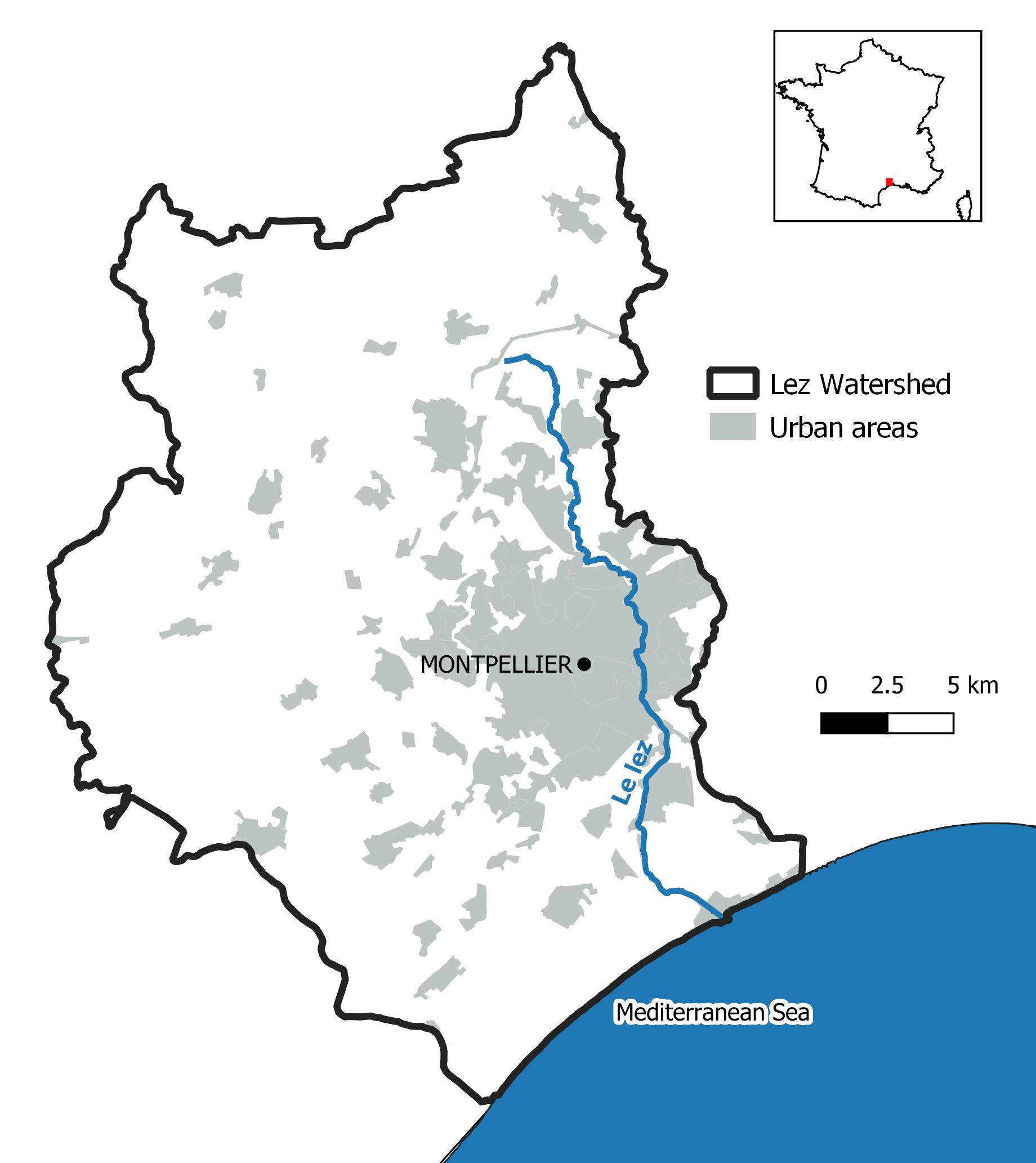 The Lez river (29 km long) is a small coastal Mediterranean river with a watershed of 746km2. Its spring is the outlet of a large karst aquifer. It then crosses natural and agricultural areas before reaching the plain of Montpellier (with 290 000 inhabitants) and the Mediterranean Sea. The Montpellier plain is characterized by a rapid urbanization with massive land artificialisation and soil-sealing (2920ha decrease of agricultural and natural areas from 1990 to 2012).

The watershed is exposed to a typical Mediterranean weather marked by repeated droughts and heavy rainfalls and storms in very short time scale in autumn, the so-called “Cevenol events”. These events generate flash floods of the Lez and its tributaries as well as runoff flooding in urban centres.

In 2014 only, 3 major events led to 65 million euros of damages for private housing and businesses. Large investments have been carried out to manage overflow risk but runoff risk remains a major challenge with 78% of damages in the recent large event of 2014.

The project aims at evaluating the costs and benefits of these NBS in order to support decision makers at the municipality level in the decision to integrate NBS in their development plan.

Concretely, we use spatial modelling to predict three possible scenarios of urban development for the 2040-time horizon. In each of these scenarios, we determine places where green infrastructure could be developed and their possible extent. We obtain six different possible visions of the Lez Watershed in 2040. For each of these visions:

Participation of stakeholders is a cross-cutting characteristic of the overall assessment approach. They are mainly involved in the identification of NBS to evaluate and the determination of an implementing strategy and of potential business models for NBS development.

SimUrba is an urban model developed by the University of Montpellier (Calvet et al., in press). Its objective is to simulate urbanization according to population growth and rules for the establishment of new urbanizations. The urban sprawl modeling is based on three main steps:

The outcomes of SimUrba will provide an update of land use for 2040 depending on the scenario, which will be an input in the CCR runoff model.

The main result we expect from this work is that stakeholders are aware of the costs and benefits of different NBS and that they integrate NBS in the development plans of the Lez Basin.

The project evaluates 3 types of Nature Based Solutions:

Urban runoff and flood damages are expected to further increase in the future and the Lez watershed is particularly concerned. Climate change and human activities are also putting strong challenges on cities: increased pollution levels, increased temperature, flood and drought risks. NBS are particularly attractive because of their capacity to respond to a diversity of challenges simultaneously. Reflexion on NBS implementation in a city is also an opportunity to reform urbanism conception. Their deployment requires a reflexion on urban planning in a broad sense such as transportation, green space management, construction norms. Developing NBS can also the occasion to change the risk management paradigm. When grey infrastructures aim to strictly control and hide the risk, NBS look for an integration of the risk in the daily life to involve resilience. In a perspective of climate change, such a strategy is more sustainable.

Dams, dikes, retention basins or pipes systems are costly investments that generally have negative environmental impacts and address only flooding issues. On the contrary, NBS are less costly investments and they have the advantage to generate a multiplicity of environmental and social benefits. However, NBS are not good at managing extreme events that can be extremely strong in the Lez demos. The complementarity of green and grey infrastructure is therefore fundamental to ensure the management of flooding risk.

Urban development and the subsequent conservation of agricultural and natural land as well as green infrastructure can meet numerous challenges of Mediterranean cities, in a climate change context. These solutions may not be cost-effective if unique benefits are considered but are particularly advantageous if the multiplicity of benefits they generate are taken into account. This multiplicity of benefits requires the implementation of cross-sectorial policies, which requires adaptation from local administrations.

This project has received funding from the European Union’s Horizon 2020 research and innovation programme under grant agreement No 730497.

NAIAD aims to operationalise the insurance value of ecosystems to reduce the human and economic cost of risks associated with water (floods and drought) by developing and testing – with key insurers and municipalities – the concepts, tools, applications and instruments (business models) necessary for its mainstreaming.

Partners of the Lez Demo: