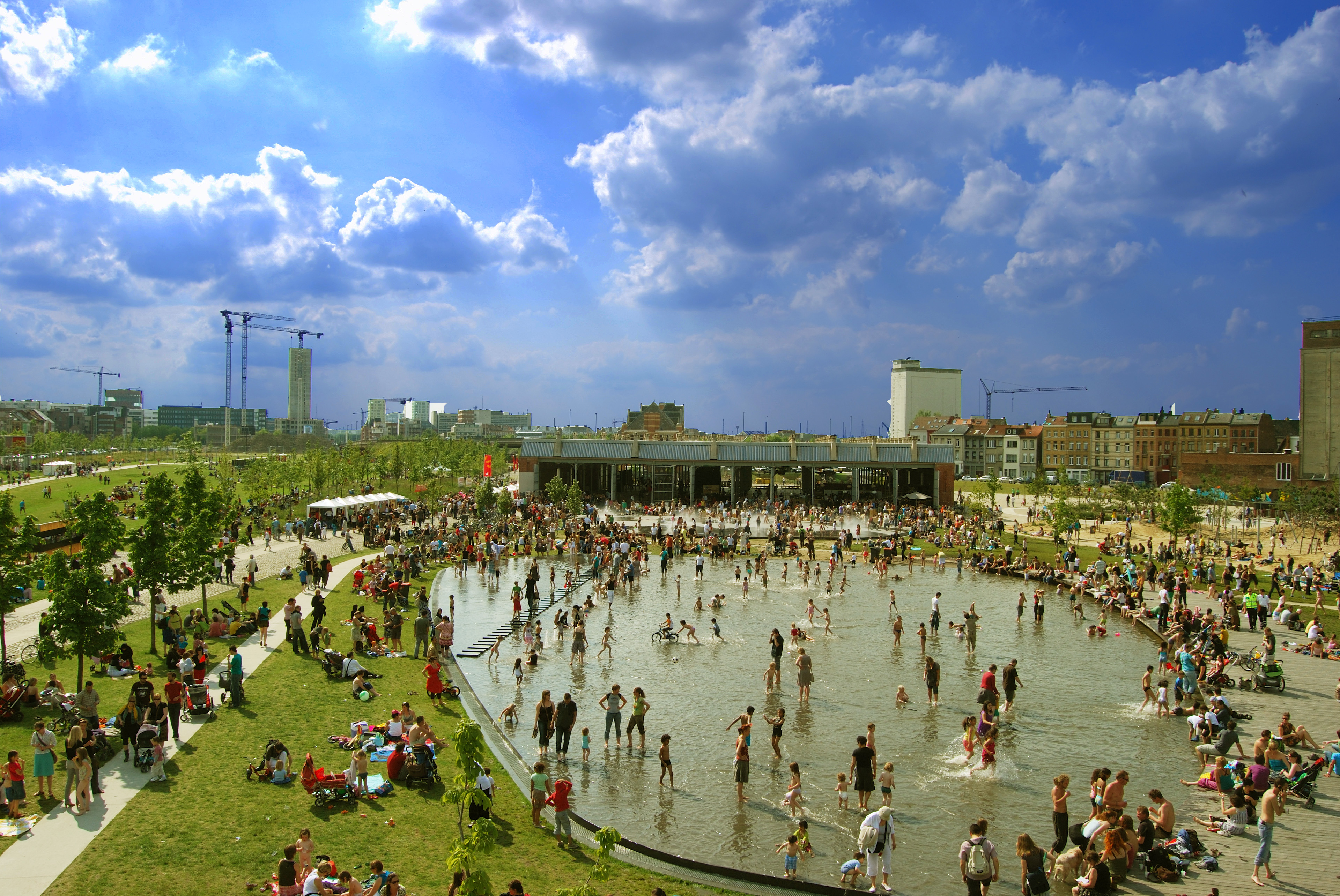 The area (24 ha, 1.6km long) was previously a railway yard and since 1873 had been owned by the Belgian national railway company (NMBS). In the mid-1990s the old railroad depot fell into disuse and in 2001 NMBS ceased its activities there. The area however retained its negative reputation. The City of Antwerp became the new owner of the site. Spoor Noord covers the districts of Dam, Stuivenberg and Seefhoek (325 ha) although the former maintenance yard at the centre of the regeneration (future park) covers only 29 ha. Both Stuivenberg and Seefhoek are residential areas with a complex community of immigrants, relatively few Belgian nationals, and high levels of population turnover. The living density is four times higher than the rest of the city, with more than 2,200 inhabitants per km2. The Dam district on the other hand, has lost 70% of its residents due to the northwards expansion of the port over the last 70 years. In terms of land use, Spoor Noord itself was mono-functional and derelict former industrial land. It created an enormous barrier between the neighboring areas. The surrounding neighborhoods include a variety of residential uses with small-scale services and local shops. The introduction of the HST fast train (northwards from the Damplein) further damaged the continuity of the urban structure and created a new barrier in already divided area.

The release of an open public space with such dimensions in a densely-built city district offered a unique opportunity to restore the connection among the surrounding areas with a solid green lung.  The site was previously a brownfield land that needed remediation. (During the entire remediation operation, approximately 100,000 m³ of land was excavated) However, even the residents of the neighboring areas faced with initial skepticism the usefulness of a park in the specific location.

The idea was to have an economically viable park that would function as social space, a space that residents with the opportunity to gain experience and be active.

The aim of the municipality was to attract investment in residential and commercial land, and generate public support for the on-going regeneration process. In this situation the great advantage of Spoor Noord was the amount of open land available for public use. According to a survey of local residents, green and open areas, space and light were identified as the main priorities of the regeneration process. The park was the starting point for a wider regeneration process.

Citizens’ consultations led to decisions that were incorporated into the planning process (Seven years of research, negotiation, planning, preparation and rehabilitation before the park was launched)

An urban planning competition was held in 2002

The proposed solution reinstates connections (ecological as well as of communication) between three areas – Dam, Stuivenberg and Seefhoek – that were previously cut off from each other by the railway site.

The main feature of the Park Spoor Noord is its dimension: a wide and simply designed lawn crisscrossed with trails that connect the various neighborhoods with each other and with the park. Gardens, sports fields, clear forests accommodate various formal and informal social practices and define multiple atmospheres. The old structures of the railway building were retained.

There is a management plan set up for the Park which contains measures for maintenance (green maintenance, waste management, road sweep, graffiti removal), for supervision and for programming in the park (coordination sport, culture, etc.).

Alongside the urban landscape park, the plan for the new Spoor Noord area was developed. This plan concentrated on the areas not included in the park, developing the idea of multifunctionality. This included the development of training clusters, a top event venue, a steam bath complex, all-in sport halls in converted hangars, new ideas for the Lobroek Dock, upgrading the slaughterhouse site and the north-south railway connection area. Together with the landscape park, this plan provided a completely integrated programme for the regeneration of Spoor Noord.

Although the programme was quite complex, the municipality adopted an implementation strategy based on ‘small steps forward’. The reason for this was because it was not possible to fund the programme from a single source. Multiple funding sources were used to support the projects, within the overall programme. The main elements of the programme were assured by the consensus brief, which was signed by all of the main stakeholders.

The Park Spoor Noord project is a key example of an integrated and global vision of urban development, whereby physical investments in public spaces go hand in hand with social improvements. To improve and develop the regeneration framework, the city used three main sources of evaluation and assessment:  community feedback;  external evaluation by funding institutions (European and federal level); and academic research carried out by universities.

Antwerp’s experiences of regenerating Spoor Noord and the neighbouring districts have revealed a number of key lessons, including the following:

• It can be difficult to involve minority ethnic groups in public participation, making it difficult to resolve cultural differences;

• The requirements of external funding bodies may not fit well with local objectives, resulting in a ‘chameleon’ approach where objectives change to fit the funding available;

• It is very difficult to solve problems to do with crime, drug abuse and prostitution—and they tend to relocate to another part of the city;

• Innovative forms of public participation which offer individuals many different ways of getting involved (including information, involvement and canvassing) have brought measurable results within the communities;

• Collaboration with research institutions has helped in the process of systematic analysis, monitoring and evaluation of the distressed areas;

• It is possible to make use of European funds (ERDF, URBAN, INTERREG etc) without neglecting local needs and local goals;

• The use of GIS helps municipal units to work together, and supports planning activities across the city.

The long-term success of Park Spoor Noord is built on the support of the local community. Generating a strong sense of ownership is important for sustainability. The organisation of events (cultural outings, festivities, sports events, walks, etc) has proved to be extremely effective in mobilising the enthusiasm of local residents and bringing a sense of belonging to a multicultural community.

The transformation of the former railway sidings has been part of a public-private partnership supported by the Objective 2 programme of the European Regional Development Fund (ERDF). The commercial aspect of the project has been vital to its success. Key to the development of the park has been the agreement in 2001 between the city, NMBS, AG ANN, and Euro-Immo-Star (i.e. the railway’s real estate arm) through which 18 hectares of the site would be used by the city for the development of the park, while NMBS and Euro-Immo-Star received commercial development rights for a 6 hectare plot (192 000 m²) on the west of the park.

Report about the project from the City of Antwerp