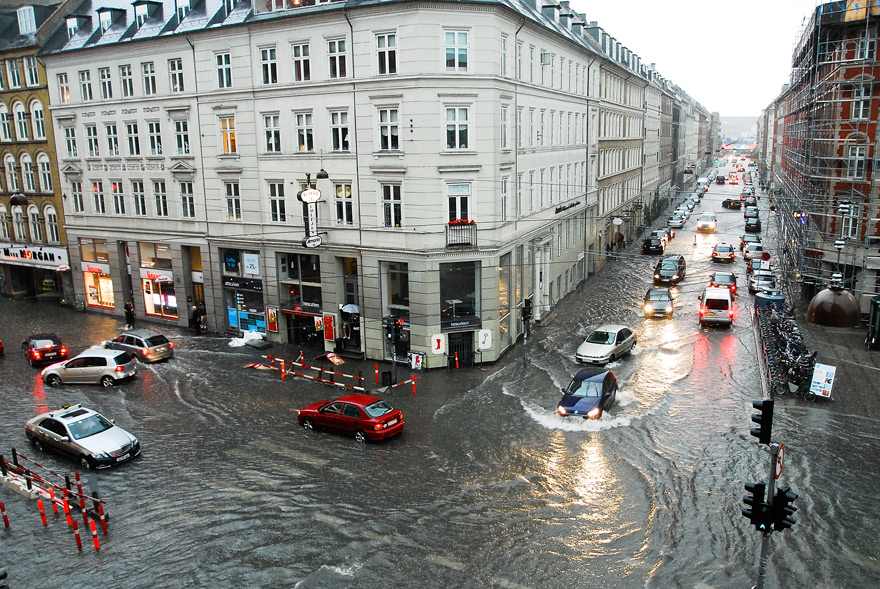 The “Cloudburst Management Plan” addresses 8 central city catchments (Norrebro, Ladegards-aen and Vesterbro, Valby & Vanlose), encompassing a total area of 34 km². It includes 300 separate projects that are expected to run over the course of the next 20 years.

The Ladegads-Aen catchment was selected as a prototypical test area due to its high risk to flooding and sea surges. Comprehensive site analysis led to establishing the Copenhagen Cloudburst Formula and a Cloudburst Toolkit of urban mitigation strategies and components

In July 2011, in less than two hours, Copenhagen was hit by an extreme 1000-year storm event – or Cloudburst – where 150mm of rain left large areas of the city under up to one meter of water. The 2011 event had been preceded by a 100-year storm in August 2010 and was hit again in 2014. Copenhagen realized that Cloudbursts were not a one-off occurrence; the threat compounds as harbor sea levels are predicted to rise one meter by 2110. In a city where many buildings and services are located below street level and where stormwater and sewage are in a combined pipe system, contaminated floodwater penetrated buildings and city infrastructure.

Conventional infrastructure is considered to be generally technical, underground, hidden elements while Blue-Green solutions are low-tech, on the surface, and interactive. The Blue-Green Approach develops a synergistic relationship between the two, integrating climate adaptation solutions within the limited confines of urban space, encouraging a solution utilizing the best of both techniques.

The Copenhagen Concretization Plans were commissioned to combat climate change following 2011’s flood. These integrated, multi-disciplinary plans bridge the gap between planning and site-specific solutions through the application of a typology-based Cloudburst Toolkit.

The “Cloudburst Management Plan” addresses 8 central city catchments (Norrebro, Ladegards-aen and Vesterbro, Valby & Vanlose), encompassing a total area of 34 km². It includes 300 separate projects that are expected to run over the course of the next 20 years.

The process was formalized as the Copenhagen Cloudburst Formula, a six-step procedure for integrating the Blue-Green Approach:

Demonstrating the relevance of the Cloudburst Toolkit palette of retrofit techniques on the first selected Hot Spot of the 10 km2 catchment of Lådegåds-Åen (a priority catchment set in the center of Copenhagen and at a high risk to flooding) investment opportunities in the form of Blue-Green techniques were created on the surface where they are visible, interactive urban components. The solutions are based on real situations, aligned to preexisting underground infrastructure.

Two masterplan variations were developed to assess potential advantages and disadvantages – Option 1 Conventional and Option 2 Blue-Green. Crisscrossed by a number of constructed urban barriers (such as streets, sidewalks, buildings, or train tracks) and with only minimal grade differences that prevent floodwaters from positively draining towards the main Copenhagen harbor outlet point into the sea, the key difference between the two options is the strategy for mitigating Sankt Jørgens Lake.

The Conventional Masterplan Option retained Sankt Jørgens Lake as it exists; there is cultural value in keeping the historical layout yet the lake currently lies above the surrounding street level and floods during rain events, requiring the creation of a new 5m diameter pipe to funnel flood water to the harbor. The technical engineering investment is calculated at twice the size and cost of the pipes required for the Blue-Green Option, and also creates limited new public green space.

In contrast, the Blue-Green Masterplan Option lowered the lake level from +5.8m to +2.8m, creating a new Cloudburst storage volume of 40,000m3 and a revitalized lakeside connection which had previously been only partially accessible. The lake overflows into a 2.5m diameter tunnel to the harbor as a reduced sized pipe. The solution combines the Blue-Green with the Grey (conventional) piped solution to result in a harmony between infrastructure and green space.

Blue-Green is the future for establishing urban ecological waterscapes while balancing sound investment and economic opportunities with social benefit improvements.

Blue-Green Infrastructure represents the next generation of water infrastructure considerations where nature, city and recreational space are rolled into a holistic package. Cities around the world can look to the Copenhagen Cloudburst Formula as a model for implementing innovative, pragmatic, feasible measures within existing urban fabric.

The insurance damage savings and the increase in real estate value are two of the highest socio-economic benefits from Cloudburst adaptation.  Blue- Green is the future for establishing urban ecological waterscapes while balancing sound investment and economic opportunities with social benefit improvements.

Cloudburst solutions can provide much more than just stormwater management. The strategic flood masterplan is the opportunity to safeguard Copenhagen while providing the foundations for a high-quality city environment. Resilient urban ecological waterscapes are the foundation for vibrant public realm spaces that are culturally and socially significant and contribute to the economic longevity, quality of life, and well-being of cities.

General cloudburst masterplan with catchments of Copenhagen and Frederiksberg (basis for the specific  master planning and project identification):

Approach, Vision and concepts of 3 masterplans covering more than half of 300+ projects in Copenhagen and Frederiksberg: