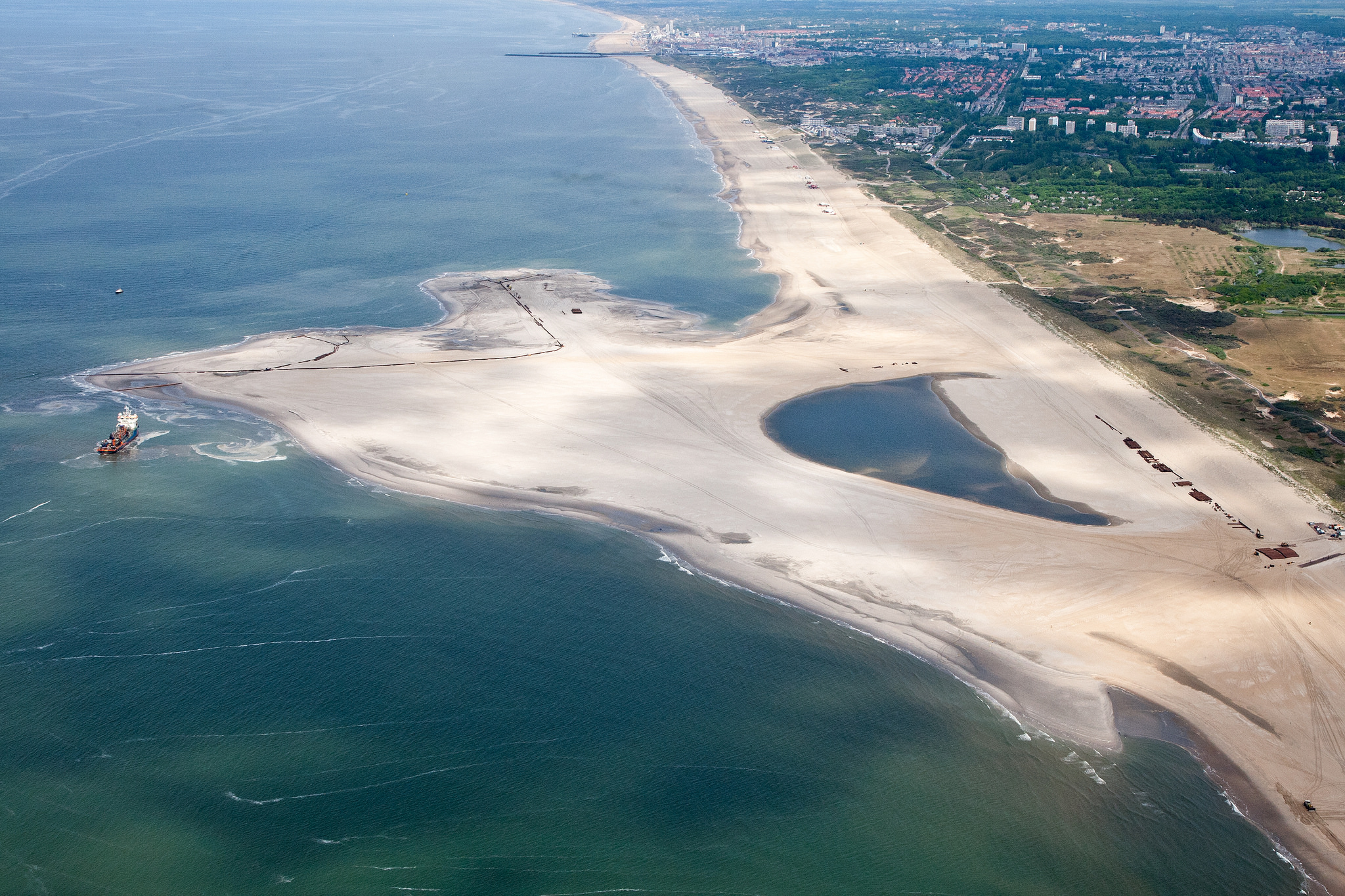 The Dutch coastal zone is prone to flooding. The Netherlands has chosen to protect the coast by means of soft adaptive solutions such as (mega) suppletions with the aim of maintaining the coastline (…) Before the construction of the sand engine, some 12 million cubic metres of sand suppletions were dumped along the Dutch coast annually. (TU Delft- Seawad project)  For the first time in 2011 at the request of the Hoogheemraadschap van Delfland (a Dutch water board, responsible for water management) as part of the coastal management and the maintenance of the coastline by the highways and the province of South Holland, a peninsula was created between Ter Heijde and Kijkduin, where natural beaches and dunes are relatively narrow. (wikipedia)

The sand engine, the artificially created expanse of sand off the coast of Zuid-Holland was developed to protect the Dutch coastline from erosion by making use of naturally occurring maritime currents (…) The idea behind the sand engine is conversely to create a single, enormous 20 million cubic metre sand suppletion in one go, off the coast. Every year, a million cubic metres of sand will spread out along the Dutch coast from the sand engine making fewer or no sand suppletions necessary over the coming years. After 20 years, the sands engine should have disappeared entirely; the whole idea is for it to wash away. The sand engine’s main advantage is that you get nature to do the work of spreading the sand around for you. (Zheng Bing Wang, Professor of Morphodynamics of lagoons and estuaries) The Sand Engine is an innovative pilot project developed to study the potentialities of a mega nourishment as a more efficient, economical and environmentally friendly alternative to counteract the effects of coastal recession (Stive et al. 2013). The project is designed in such a way that it should also generate additional benefits for nature development, recreation and knowledge development. (IADC report pg 74-83)

The Sand Motor has become an international icon of innovation. In Jamaica as well as in Norfolk in the United Kingdom, there are plans for a sandy strategy like the Sand Motor

Experts are already contemplating whether the same principle might be used in the Wadden Islands to protect them from constant sea erosion and rising sea levels. That idea constitutes the basis for the SEAWAD research project (TU Delft).

Before the trial began, the Sand Motor was expected to last for twenty years. It was thought that the sand would be spread along the Delfland coast during that time. That will probably take longer. At present, the Sand Motor is already supplying sand to a five-kilometre stretch of coast. In the first four years, almost a million cubic metres of sand was moved to the south and about 1.5 million cubic metres has been moved to the north. Dunes in the coastal area near the Sand Motor have grown less quickly than expected. However, this has not affected the level of protection afforded by the coast since the coast was already strong enough before the Sand Motor. The main reason the dunes are growing more slowly is that the sand has to cover a relatively large distance before reaching the dunes.

Five years after the Sand Motor emerged from the waves, the results of the first major evaluation have been published. The conclusions are positive. Five years ago the scheme started with three goals: increase coastal safety, create extra space for leisure and nature and contribute to knowledge development about coastal management. Results show that these goals are achieved, sometimes even better than expected