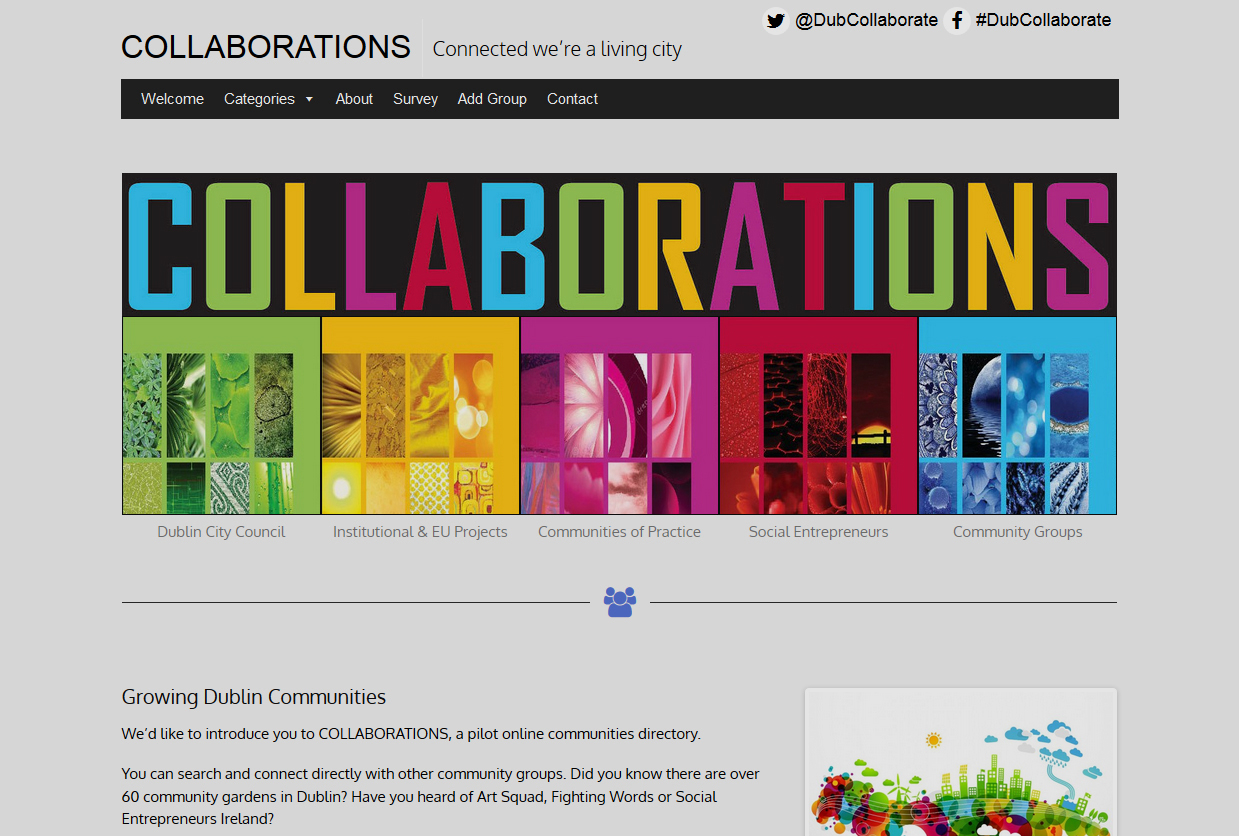 Sharing knowledge and bringing together diverse perspectives on Dublin's future.

The aim of the project was to create an online community directory which will allow and facilitate the connectivity between different individuals and groups in Dublin. Click here to visit website

The Dublin City Council (DCC) was the lead for this project, supported by Code for Ireland and community groups.

The website was a result of a collaboration with Code for Ireland and community groups supporting the creation of the online community directory.

The pilot project was based on a government policy plan of 2012, named "putting people first", which is an action program for effective local government in Ireland.

The pilot project could be connected to the Local Government Reform Act 2014, to the local economics and community plans and a public participation network, but should be supported by community officers in charge, who are not interested so far.

The availability of trained human capacities was limited, so most of the support came from volunteers. This meant that the process of implementation was slower and had a higher turnover risk.

The project availed interns from University College Dublin (UCD) to process the flux of data received from different sources. The role of the interns was essential as they provided a large part of the workforce needed. Their commitment was also highly valuable for the project.

Launching the online community directory, which will host as a space for communication between the different groups of the community.

In the long-term, it is expected to strength the social capital of the different communities visible on the directory and create effective participation between communities and local authorities. This will allow for the creation of sustainable solutions for urban spaces.

"In order to best utilize the resources of the project, participatory planning is essential. It is important to involve target communities in the initial stages in order to include them in all steps of the project. When projects are involved with different types of communities, it is important to find the right tools that attract attention and increase the interest in participation. Using appropriate visual communication designs can increase interest in the project concept. Planning is essential to guarantee the utilization of the right resources, such as volunteers, at the right time."Johanna Varghese, Dubin City Council

TURAS expert contact:
Johanna Varghesejohannavarghese@gmail.com
Embedded researcher in the city council from the experience of an architect-urban planner