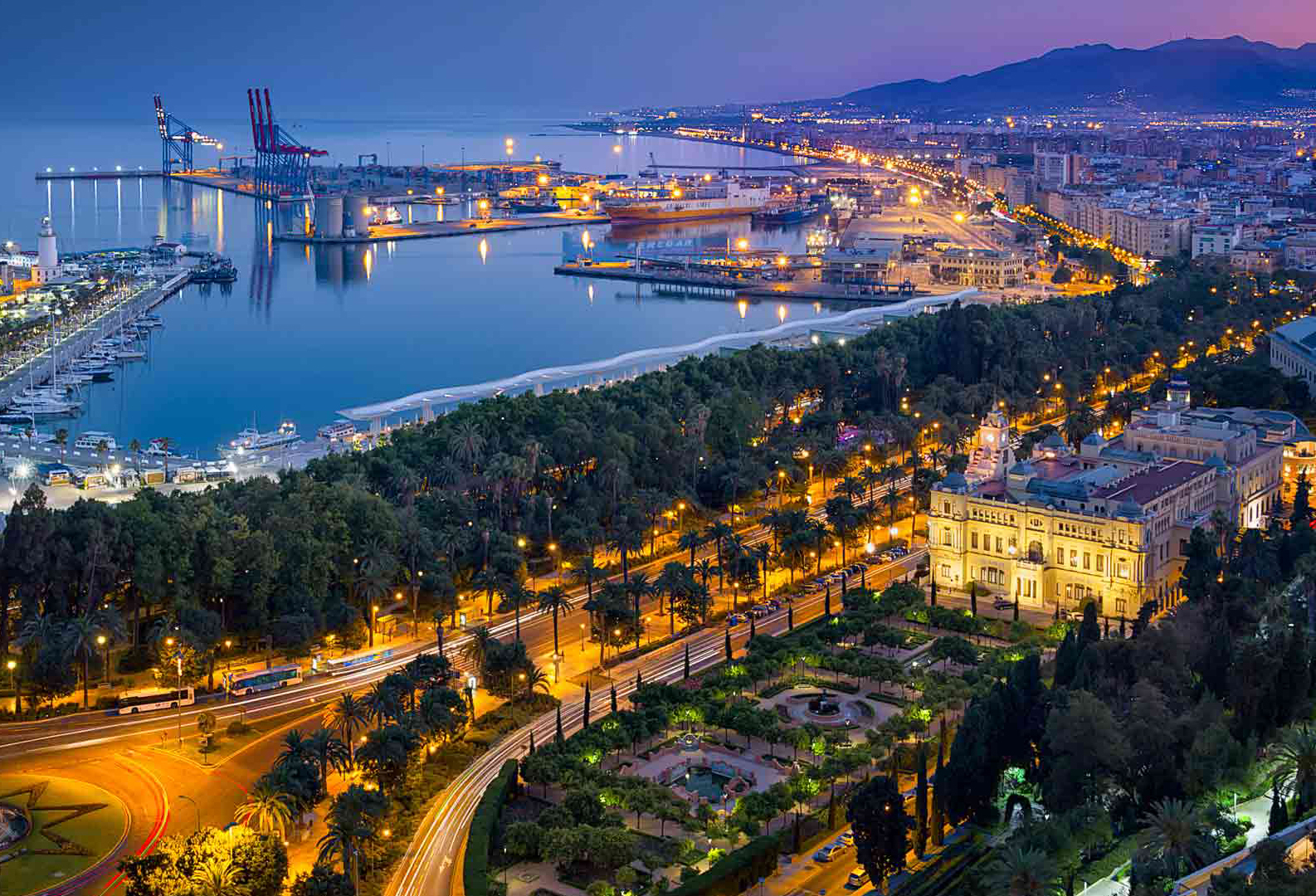 Malaga takes the region's socioeconomic destiny in its own hands.

A robust and sunny coastal economy takes advantages of environmental resources and complements tourism with a range of other opportunities such as community-based businesses.

A multi-actor process of co-creating a blueprint for socioeconomic and environmental development decreasing the high unemployment rate in the Málaga region.

What are we dealing with?

A regional economy regulating itself is an illusion

Prior to the financial crisis of the late 2000s, the regional economy was to a considerable extent driven by the construction sector. This meant relatively high wages and strong employment for different groups of the population, including young or relatively unskilled workers. But the South of Spain and Málaga in particular was particularly hard hit when real estate prices started to fall in 2007. The banking crisis also meant that new investments where stopped – even a lot of building sites that were already in progress came to a halt.

The over-dependence of Málaga’s economic system on the construction sector is problematic for at least two reasons: Firstly, a crisis in real estate development is not compensated for by other economic sectors so that it becomes a general crisis, leading to high regional unemployment and other economic problems, such as the loss of fiscal income. The construction sector often functions in boom-and-bust cycles that are unsustainable because it lacks the continuity that is crucial for training, stability and long-term investments.

Secondly, it can be argued that developing land cannot be a sustainable strategy to begin with. Clearly, there are geographical and environmental limits to the number of developments that are acceptable in the Málaga region. In certain areas along the coast these limits may have already been reached and now create problems in terms of water supply, density and even quality of life for the residents. In many places, the aesthetics of the Mediterranean coast have been dwarfed by the omnipresence of concrete and asphalt. Some coastal ecosystems have been reduced in size and quality.

The rise and fall of the construction sector as economic engine of the Málaga region is closely linked to a second driver of growth: tourism. A considerable portion of the demand for new developments has come from different forms of tourism, including hotels, holiday apartments and estates for permanent vacation. Fortunately for the regional economy, the slump in the construction sector was not mirrored in the tourism sector. Especially the city of Málaga continues to attract numerous visitors that come by plane to the nearby airport or on cruise ships to its conveniently situated harbour. Like the construction sector, tourism is a labour intensive industry that employs a workforce that is both relatively young and low-skilled. While the robustness of the tourism industry is good news, a strategic analysis of the regional economy suggests that it would be unwise to rely on it in the future. As the experience of certain regions in Greece and Southern Italy show, a reliance of tourism shouldn’t be seen as a reliable strategy for long-term economic prosperity.

In addition to the distribution of economic activities across different sectors, there are other factors that currently block the development the regional economy. Business networks, for instance, still tend to be relatively weak. On some occasions, the absence of strong business associations has hindered the emergence of close partnerships with public authorities – this is clearly a problem if public-private partnerships are to take advantage of local knowledge and networks. By and large, the business landscape starts to internationalise, but there is still limited awareness of regional entrepreneurs about the opportunities abroad, especially possibilities in the Maghreb. Finally, the regional financial system is characterised by a very weak supply of private financing. Unicaja is often not sufficiently involved in boosting business activities. If private funding is available for business projects, it tends to be tightly linked to conditions that are hard to meet regional actors.

"We are confronted to different challenges and it is important to have a bottom up approach. TURAS is helping us to connect people and to create the right platform." - María José Valenzuela, Asociación Comerciantes Centro Histórico.

What is the vision for the region?

The vision for Málaga anticipates an open metropolis that revolves around many different areas. It will be a metropolis that looks out onto the sea and that celebrates Picasso’s Málaga, both cultural and attractive and well placed in the state-of-the-art knowledge-based society, in other words an enhanced city for both its citizens and its visitors.

Moreover, the vision emphasises a metropolis with a multi-centre urban layout that provides services for the city and the overall metropolitan area by ensuring appropriate structures for its inner linkages. Its development will be in line with criteria for territorial solidarity and a firm commitment to coherent planning and economic steering for the coast as a whole, ensuring friendly settings for residential, social and business uses alike. A coast that stands as a source of wealth and quality of life where modern services and amenities link into the Port as the hub, retrieving the sea for the city.

A nexus between the sea and the city will provide thrust for development and will promote leisure and business areas. In other words, this portside area will be capable of providing interconnections with an integrated, modern communications and transport system, applying rational criteria for efficiency and sustainability, both within the city itself and for its links with other areas.

What is the strategy for the region?

Complexity is not chaos - it can be managed through structured cooperation

The complexity and interdependence of economic, urbanistic and environmental planning is overcome by a new participatory process for co-creating Málaga’s economic development model.

The strategy for co-creating a new model for Málaga’s economic development are based on the principles of economic, social and environmental sustainability; of citizen commitment where everyone takes part and contributes; and of cooperation and shared work by pooling both individual and collective efforts.
A commitment to a participatory process is firmly placed at the very centre of the new urban model. As a result, ways must be found to boost all actions that require interaction and networking between administrations, stakeholders and citizenry at large. Shared knowledge and expertise will afford a sufficient degree of involvement that will enable the right decisions to be made and a single view for the future of the city to be harnessed.

The economic, environmental and social dimensions of the Málaga region are interconnected. Steering them in a coherent and deliberate way will require tools and processes that are able to manage the complexity of regional systems. This is all the more difficult as planning competence and steering authorities are distributed across a range of actors, such as local and regional administrations, political decision makers, civil society, business associations etc. The strategy for overcoming the fragmentation and articulating a coherent economic development model is based on the creation of an inclusive multi-actor platform in which different visions and options can be discussed and negotiated.

Crucially, the platform is not only about debates and intellectual exchange of knowledge. It also uses “incubators of local transitions” to experiment with new socioeconomic models on a sub-regional scale, for instance by testing innovative business ideas in a specific neighbourhood. The incubators of local transitions” will be complemented with “creative workshops” that help to generate ideas and provide feedback through moments of collective creativity and brainstorming. Both of these instruments will inform a regional Action Plan and help defining the Integrated Transition Strategy, a document that will provide the blueprint for making Málaga’s new economic development model a reality. The Integrated Transition Strategy will afterwards be implemented through local dissemination of its content, but also by active exchange with experiences of other European regions.

While most of the input for the Integrated Transition Strategy will be co-created by the local partners throughout the process, the Second Strategic Plan from 2006 has already provided some useful guidance as to which kind of projects could be useful for the development of the City of Málaga. It has notably selected a limited number of so-called “star projects”. These projects were expected to make a major contribution in the way of implementing the vision of the Second Strategic Plan, impacting on the metropolis itself from a very long-term standpoint. The ten star projects that were selected in 2006 are:

The Airport and the River Guadalmedina have been selected as the most visible banners in the development of the metropolis on a national and international scale, clearly reflecting the improvements to infrastructure and a firm commitment to quality. These projects are inextricably linked to planning for mobility within the metropolitan area with sustainability as the key element underpinning all work that is to be conducted.

Finally, projects 7, 9 and 10 are cross-cutting policies and are essential to ensure full implementation of the remaining projects. Advancement in the quality of life in Málaga will only be possible thanks to a more supportive, diverse and integrative society. And good governance of the metropolis and success of the projects described herein can only be achieved through new links for cooperation and collaboration between administrations and citizens.

How do we implement the transition?

The network is established, funding opportunities and pilots identified

Building on the TURAS momentum, a multi-actor platform was set up in 2014. Four exploratory workshops for new local economic development opportunities have already been organised.

The funding and momentum that has come with the European project TURAS, of which Málaga is a partner through the regional development agency Promálaga and the Málaga-based environmental company Bioazul, has allowed to establish a network in which a new economic development model is currently co-created. All key actors have been identified and approached so that the network is not only operational, but also balanced and inclusive. It includes more than 40 partner organisations and independent experts and is coordinated by Promálaga, in cooperation with CIEDES.

The network has completed the system analysis and started to formulate its vision for the region’s development. These activities have been supported by four participatory workshops. These workshops have been events of intensive collective creativity and have explored business opportunities and new economic models at different scales, including the neighbourhood scale. Looking at neighbourhoods such as the city centre or the Huelin, one of these workshops has mobilised experiences from Brussels, a city that is at the forefront of combining environmental and economic policy making through its ambition Regional Circular Economy Plan. This has allowed to transfer knowledge on Product Service System and Circular Economy to the socioeconomic context of Málaga.

Finally, another TURAS output that Málaga started to adopt is transversal planning. Promálaga and Bioazul have started to collaborate with OSMOS, a TURAS spin-off company, in order to improve the process of participatory planning under conditions of complexity. Together, they have started to develop a concept note for the reconversion of the Canteras in the North of the City of Málaga, an underused environmental asset that provides many opportunities.

To ensure the continuity of the network’s action towards a new economic development model, follow-up funding opportunities have already been identified. Promálaga notably participates in a bid for a Horizon2020 project that would allow the region to get access to knowledge and experience from cities around Europe that led the way in nature-based solutions. The above-mentioned possibilities linked to the underused Canteras is one of the places in which such nature-based solutions could become environmental, social and economic opportunities for the Málaga region.

TURAS Intergrated Projects which can be implemented to initiate local transition: