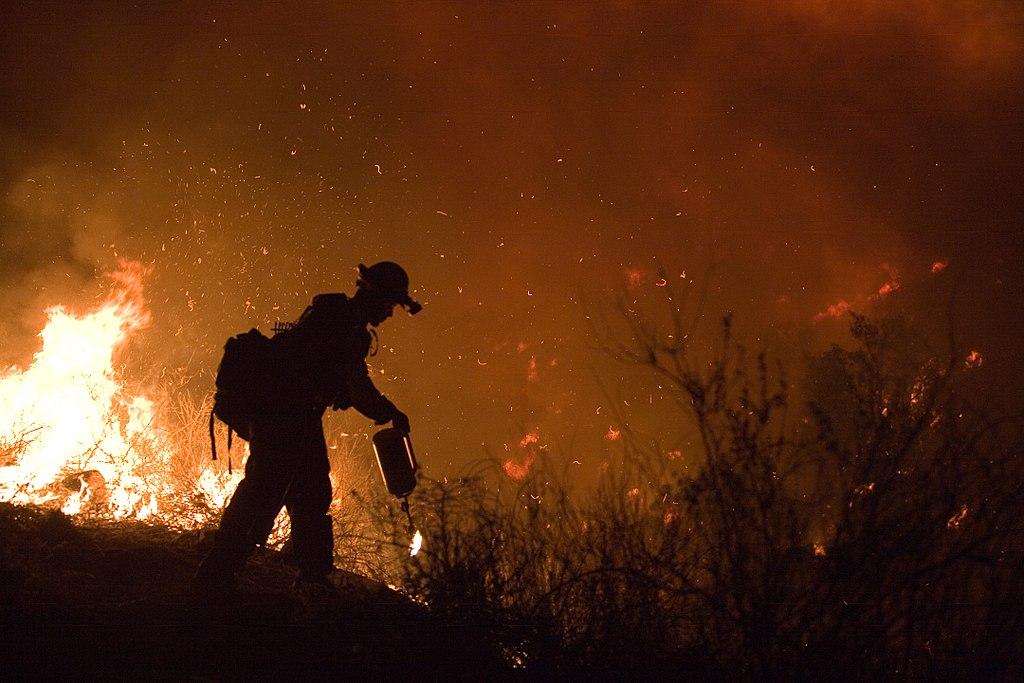 Restoring natural ecosystems can help to keep land moist, while record temperatures are causing wildfires to spread across Europe

Firefighters have been pleading with park-goers across the UK that carelessness in these parched conditions can turn grassland into a tinderbox. 220 firefighters and 40 fire engines had to attend to a fire in Wanstead Flats near London’s Epping Forest over the weekend that was the largest in their history, with an area of 100 hectares up in flames.

The blaze is the latest in a spate of wildfires engulfing parts of the UK. Ecologists and conservationists, may, though, have an answer. Recent efforts at rewilding moorland and peatland to restore more balanced ecosystems may be able to mitigate the risk of wildfires, with plenty of other benefits to boot.

Lee Schofield, site manager at the RSPB’s Haweswater site in the Lake District, has been part of an effort by United Utilities to ensure water passes through the land more slowly. For United Utilities, who own the whole water catchment in the surrounding area, the hope is that water reaches the reservoir in a much cleaner state than it otherwise would.

In Victorian times, the thinking was that creating channels called drainage grips was better for farmland, converting the area from a moss-dominated environment to a dryer one. This intensified during the drive for food security after World War II, when farmers were paid per head of livestock, and more drains were put in place.

The Victorian assumption wasn’t really true, Schofield says, and actually the layer of sphagnum moss acted a lot like a big soggy blanket to keep land moist and workable even when the water table drops. “Some of the guys that have done the peat restoration work around Haweswater, they were actually paid to put some of the drains in that they were then later blocking up again,” he says – and both were funded by government grants.

Restoring natural processes, in this context, is quite simple: it involves blocking up drains with mounds of peat and restricting the grazing of livestock like sheep. At Haweswater, Schofield says, a wetter suite of plants brings a more vibrant suite of insects and wildlife. Initially, blocked up drains create wet pools that will in time become mossy land with more integrity since peat that is kept wet is much harder to erode and gives off less of the CO2 it stores.

Areas that are particularly at risk of fire are grassy with plenty of dwarf shrubs like heather, says rewilding expert Alastair Driver, professor of applied environmental management at the University of Exeter. A more boggy, rewilded peatland would be more resistant to fires than a pure heather moorland because fires are less likely to get a foothold in these wetter areas. And if they do start, it is generally easier to put them out because they don’t spread as fast.

Fires aren’t the only issue the bogs can resolve. They also help in flood conditions, because the land can store more water, stemming the water’s peak flow. And, in the drought that we’re seeing at the moment, because you're holding more water back, this means that when it does go dry, the water is still running slowly off the uplands because more of it's been held back by vegetation in the first place, Driver says.

Rewilding has become something of a battleground in the UK. Farmers, so the story goes, are pitting themselves against ecologists, and see this as unwanted interference, an attempt to obstruct their grazing of livestock. In reality, Schofield and Driver say, rewilding doesn’t mean the elimination of farming but the better management of it. Farming would continue in certain areas, while in others, a more wild environment would be allowed to develop.

Driver, a specialist advisor to Rewilding Britain and former head of Conservation at the Environment Agency, says the aim is to find very large areas, tens of thousands of hectares, to rewild. “You have the ambition to develop what you'd call core areas, where you significantly reduce the management of those core areas so that they move to a much wilder state over a period of time,” he says. And other parts would still be farmed as normal.

Rewilders hope to restore between ten and 50 per cent of upland national parks over the next 100 years, and they are currently scouting out locations in the Peak District and Kielder Forest in Northumberland, with work already underway in parts of Wales. These uplands are areas at greatest risk of fire, so rewilding could have a major impact while temperatures continue to rise.

Blocking ditches to restore peat bogs is one aspect of this wider philosophy, which also includes practices like planting trees to kick-start the restoration of scattered woodland, restoring rivers, reconnecting them with their floodplanes lower down the catchment, and the reintroduction of apex predators like golden eagles to rebalance certain natural cycles. This brings with it a “mosaic of vegetation types”, Driver says. “You're going to have a wider range of species, insects, birds using those habitats.” All this, rewilders hope, will lead to an uptick in wildlife tourism.