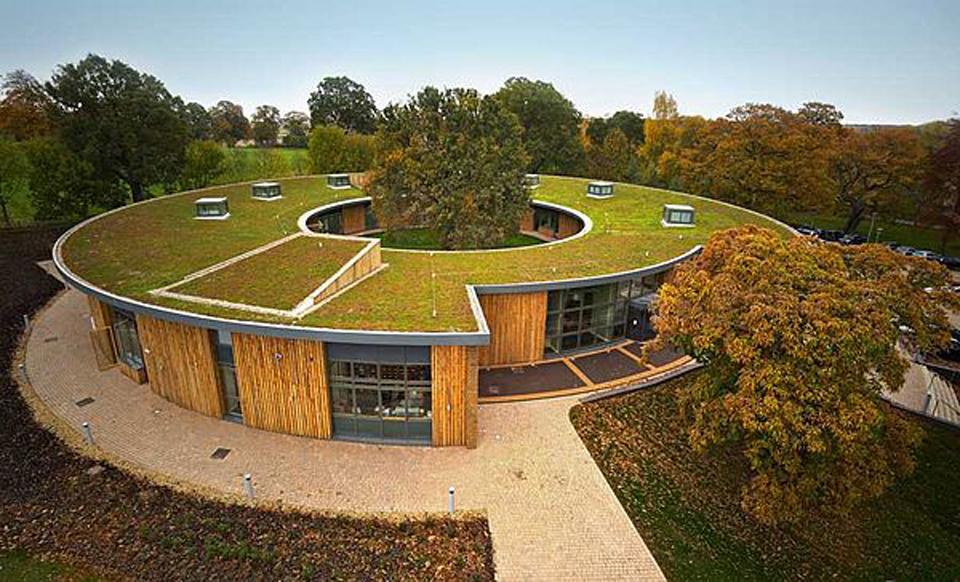 Green roofs and white paints are a heat-buster's best friends.

Like hot dogs on Memorial Day or fireworks on the Fourth of July, melting roads are now an essential marker of summertime. In 2013, police closed parts of the M25 highway, which encircles the city of London, England, after asphalt started to melt, according to a BBC report at the time. In 2016, a viral video showed people in the Indian state of Gujarat losing their sandals to a ravenous roadway. And in 2018, the same thing happened in Australia (where the southern hemisphere summer begins in December), with local outlets reporting traffic came to a crawl as the pavement started to bubble.

To cope with goopy roadways, a cyclical spate of summertime deaths, and other dangerous side effects of extreme heat, cities are looking to a different kind of black top: your roof.

Steven Peck is the founder of Green Roofs for Healthy Cities, a Toronto-based organization that seeks to promote, showcase, and advance the emerging field of living architecture in North America. At its broadest, living architecture blurs the lines between organic and inorganic—plants and plywood, quails and concrete. Peck says one of the most effective tools in the living architect’s kit is “vegetative technology,” which includes things like green roofs and vertical gardens.

They're also useful in a heatwave. Existing roofs are typically black and made of emissive materials that generate heat easily. As a result, the sun’s rays are readily absorbed and resulting heat is channeled into the building. But green roofs are covered in hungry plants, which greedily absorb the sunlight themselves. By replacing a traditional roof and replacing it with a living one, building residents below are spared the brunt of extreme solar heat.

“If you take this black roof and you cover it with a green roof, you’re eliminating a heating source, [and] you’re also introducing a cooling source,” Peck says. And that’s important, especially in cities and suburbs, which experience the infamous “heat island effect.” Miles of pavement, few trees, and dense clusters of heat-absorbing buildings mean that cities are physically warmer than surrounding rural areas. According to the EPA, the daytime difference is about 5 degrees; at night, it’s a difference of about 22 degrees. And you don’t have to be cruising downtown to suffer. “It’s actually not just cities anymore: It’s entire metropolitan regions,” Peck says. “They’re starting to create their own weather.”

Infrastructure like roads, train tracks, and even bridges crumple in these urban heat island conditions. Of even more concern is human health. Our species has a very slim margin of thermal comfort. Research shows that extreme heat raises the risk of heart attacks, dehydration, heatstroke, and death. Particularly vulnerable populations include the very young, the very old, and individuals with chronic illness, as well as people unable to afford amenities like air conditioners (or the energy that keeps them running). While careful preparation is key to any individual surviving a heatwave, experts argue lowering the overall urban temperature is just as important.

Green roofs offer many benefits, but establishing them can be expensive, and upkeep isn’t always easy. One type of green roof is called “extensive.” Lightweight and easy to drain, these roofs have a shallow growing medium and a relatively homogenous group of plants, typically succulents. Extensive green roofs may require maintenance as little as twice a year. These roofs clock in around $10 per square foot, according to the University of Minnesota. On the other end of the spectrum is an “intensive” green roof. Heavier, more expensive, and in need of more upkeep, these roofs have a much deeper growing medium and a much wider array of plants. The university pegs these roofs at $25 per square foot. The cheapest roofing shingles, by comparison, are around $2.50 per square foot.

There are cheaper cooling options on the market. Instead of planting a green roof, many people opt to buy a can of white paint and slather it on their roof. A 2014 study found that white roofs, which reflect the sun’s rays instead of absorbing them, were actually more efficient than green roofs at mitigating extreme heat. While they lack the water-related benefits of a green roof, white roofs—and even white-painted pavements—are spreading. Los Angeles, for example, announced its plans to reduce its urban heat island effect by 3 degrees in the next two decades by painting its streets with a light gray CoolSeal paint.

Additionally, many cities are focused on replenishing their dwindling tree canopies. Defined as the percentage of a place covered in leaves, branches, or stems when viewed from above, tree canopies in American cities recede by about 175,000 acres each year. But for communities that have replanted and carefully tended to their trees, the localized urban heat island effect appears to decline dramatically.

Trees thrive on solar energy and provide shade from its penetrating rays. And, like plants on a green roof, healthy trees provide something called evapotranspiration. When the temperature rises, leaves transpire—or, in more human terms, sweat—effectively cooling the plant down. This diverts energy that might otherwise heat the surrounding area, and releases water vapor into the air, both of which have a cooling effect. Combined with shading, the EPA estimates trees can cool summer air by 2 to 9 degrees.

However cities go about cooling down, it’s clear that climate mitigation starts up top. “In Chicago's July 1995 heat wave, a major risk factor in mortality was living on the top floor of a building with a black roof," Arthur Rosenfeld, a scientist with Lawrence Berkeley National Lab said in a 2014 statement advising cities to systematically adopt green or white roofs. "Government has a role to ban or phase out the use of black or dark roofs, at least in warm climates, because they pose a large negative health risk." What comes next—green, white, or something else entirely—is up to you.