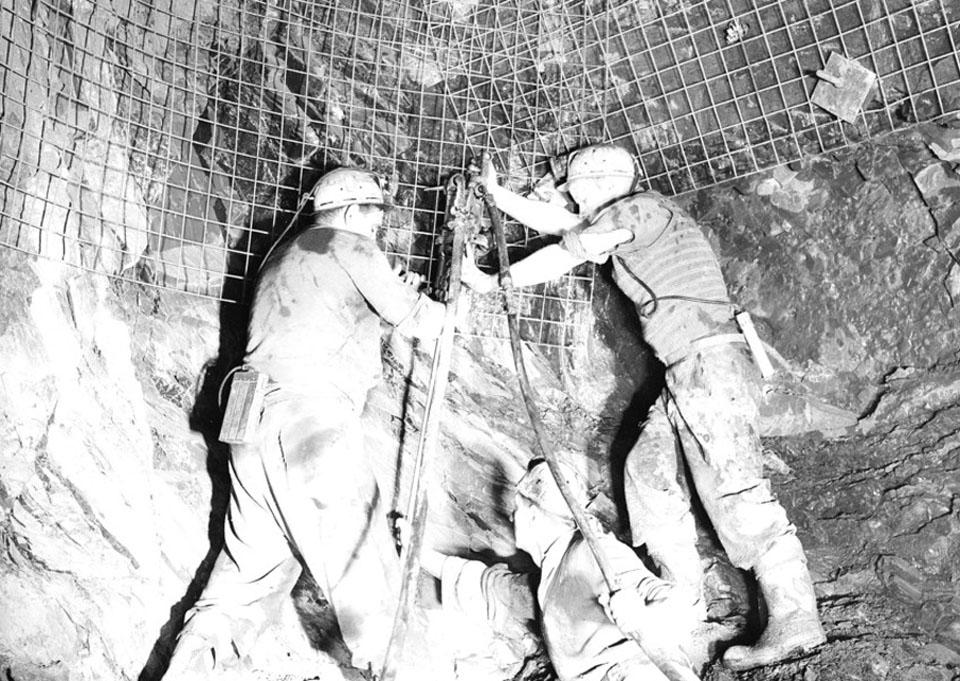 The warmth from old coal mines could be used to heat the homes of people living in fuel poverty, writes Professor John Underhill.

Fuel poverty is one of the leading social challenges in Scotland today and it will be the renewed focus for many as the nights draw in, and we ready ourselves for winter. As more than one in four households will struggle to make ends meet over the next few months, it may come as a surprise to learn that a solution to this social and energy crisis may lie directly beneath our feet.

Miners work in the heat of the Lady Victoria coal mine, some 2,000 feet below Newtongrange, Midlothian, in 1958 Currently defined as a household that needs to spend over 10 per cent of its total income on domestic heating, fuel poverty impacts 650,000 (26.5 per cent) Scottish homes. More than 183,000 are classified as extreme cases because 20 per cent or more of their annual household budget is spent on heating. One in ten are families with children and around 90 per cent are either owner-occupiers or people living in social housing.

The largest concentration of households affected lie in densely populated urban areas which grew up around heavy industry and manufacturing centres. Many of these have long since reduced in size or closed, leaving a landscape and community blighted by high unemployment and deprivation.

Given the scale of fuel poverty, the time is ripe to reap the benefits of geothermal heat generated by old coal mines. It’s ironic and perhaps paradoxical to suggest that a solution to the fuel poverty crisis could come from the most polluting, black and dirty fossil fuel which we, as a nation, have worked so hard to remove from our energy mix. This effort has been so effective that the UK power generation had its first coal-free day last April.

Up until the discovery of oil and gas on the UK continental shelf 50 years ago, coal was the bedrock of our energy needs. Although its use was introduced before coal’s detrimental impact on human health and climate change was fully appreciated, the over-reliance on one fuel-stock led to tensions between Government and the industry.

The opening up of the North Sea petroleum province in the 1960s and 70s altered that dynamic and provided a new, cleaner alternative power source. Major gas production drove a change with domestic supplies shifting from coal fires to gas-powered cookers and central heating systems.

The UK had plentiful gas reserves that more than met the country’s needs until 2001. However, the past two decades has seen an inexorable decline and we now rely on international imports for over half the total required to keep the lights on and to heat our homes.

Some have argued the shortfall could be addressed through shale gas extraction but that has proved hugely controversial due to environmental concerns. Significant question marks have been raised about whether the UK’s geology supports extraction on the scale required.

To date, the focus on geothermal energy in the UK has concentrated on areas like the granites of the Cairngorms and Cornwall because they have a higher geo-thermal gradient. While it’s evident these areas can provide heat locally, industrial-scale supply to the people that need it most is impractical because of the difficulty of storage and transportation to centres of population.

But a different kind of geothermal heat source could provide an answer: renewable energy from the most unlikely of sources. A major benefit of coalfields is that most are close to and often directly beneath large conurbations. Although they are not going to be as productive as areas marked by volcanic activity, like Iceland or Hawaii, they could provide enough heat to serve the needs of the stressed communities where fuel poverty hits hardest.

Coal mine geology is also highly favourable and, unlike solid rocks where natural porosity, permeability or fracture patterns dictates flow, water can pass through a pit’s trellised network of shafts more easilysince they are akin to fluid ‘super highways’.

The process by which heat can be extracted is similar to that used by a fridge. The warm water from the mine is moved into a store in which a refrigerant can extract the heat and convert it to a gas. The gas passes through a compressor which heats it to around 50C to warm the water in a tank. This then supplies warmth to the property. The compressor does use up some electricity but is hugely efficient, giving back around four times more energy than is needed to power it. The cooled water extracted from the mine, the gas needed to heat the water tank and the hot water used to heat the house can all be used again in the same process. Importantly, the system can be reversed and a building may be cooled during summer months.

Small pilot schemes are already working to supply heat from coal mining areas to a housing estate in Rutherglen and a swimming pool in Stanley, County Durham. The Scottish Government’s Geothermal Energy Challenge Fund is supporting studies at Fortissat, North Lanarkshire, Polkemmet in West Lothian and Grangemouth in Stirlingshire. In addition, a sedimentary aquifer project is being investigated at the site of an old paper mill at Guardbridge near St Andrews and a large-scale district heating network is serving a low-carbon development in Kilmarnock.

While the Rutherglen housing scheme demonstrates that old mine workings can supply heat locally, the question remains – can heat supply be replicated on a scale with a positive impact on social well-being? A large research site is being developed in the Clyde Gateway, an area of urban regeneration in the east end of Glasgow.

Funded through the Department of Business, Energy & Industrial Strategy (BEIS), commissioned by the Natural Environment Research Council (NERC) and delivered by the British Geological Survey (BGS), the UK Geoenergy Observatories project will assess the feasibility of heat sources from abandoned mine workings. The Clyde Gateway lies above former coal mines in which the main seams occur at depths of up to 300m below the surface and at an ambient temperature of around 15C.

The Observatory for Glasgow could prove that shallow geothermal energy within abandoned mines offers an alternative to gas-fired domestic heating that can be scaled up to provide a cheap, local alternative source of warmth to areas with some of the highest levels of fuel poverty in Scotland.

In so doing, it offers the opportunity for the UK and Scottish Government to move towards meeting low-carbon energy targets. Significantly, it would also see the sites of the most polluting, old, black and dirty fossil fuel translated into a new, reliable, cheap, low-carbon, renewable green-energy source.