Poznań is a city rich in green spaces, however they are not equally distributed in the city. Despite having a well-developed green infrastructure system (called “green wedges”), the densely built-up districts in the historical areas are lacking green infrastructure. Therefore, the challenge for Poznań is to improve the quality of life in those areas, that at the same time are highly populated. Poznań also faces the challenges of climate change effects, especially heat waves and episodic flooding from intense rainfall (especially flash floods). The high rate of soil sealing in the city centre’s densely built-up residential areas has resulted in unfavourable thermal and moisture conditions and limits the potential for water retention. The creation of pocket parks and urban gardens on abandoned, brownfield and vacant or neglected land contribute to more equal distribution of green in the city, mitigate heat island stress within residential areas and improves the water retention potential of the area. These pocket parks and urban gardens increase water retention and minimise the pressure on drainage infrastructure.

The Poznań nature-based solution exemplar aims at multiplication of small-scale nature-based solutions interventions in the city with special focus on those areas that are densely urbanised and inhabited by citizens who have limited access to greenery. Such “up-scaling approach” will extend the network of green infrastructure in Poznań and also complement the green wedges which run through the city, from north to south and from east to west, creating a natural network.

A nature-based urban green network will ensure accessibility and availability of green and blue spaces to citizens across the city and contribute to protection from flooding by a cumulative water retention capacity. Such nature-based solution exemplars are challenging for Poznań given its large-scale, the balance it needs to strike as multi-functional and yet integrated to existing urban structure and functions of the city. 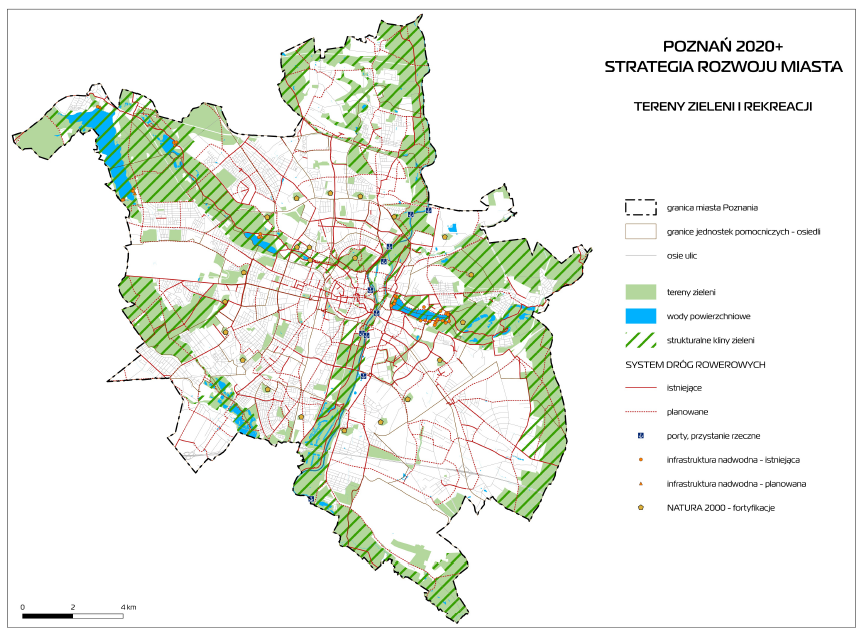 Areas of greenery and recreation in Poznań

Source: Development Strategy for the City of Poznań 2020+

The City of Poznań draws on its lessons learnt from the two unique projects that are foundational stones to the nature-based solution exemplar. An important lesson learnt from the past several years is the multifunctional development of areas at risk of flooding along the river Warta, including the creation of city beaches and recreational facilities at the previously neglected river side; increasing the social and ecological potential of the area in the city centre along the river by implementing cultural actions; and the improvement of the water quality as well as strengthening a ‘green wedge’ (by consolidation and de-fragmentation of urban green spaces). We draw this experience as one of the case studies analysed for the future similar activities.

Climate change/adaption and sustainable use of resources

Greenery in the city, due to the characteristic relief of the terrain with a cross-shaped system of river valleys, historical conditions and natural features of the landscape create a “green ring-wedge” system. The city is located on the axis of river valleys running north-south and east-west. On the suburbs of the city green, the ring-wedge system has a forest character and connects with regional forests in a larger scale. In the city centre, however, green wedges are narrower and supplemented with fragmented green rings surrounding the centre. These rings (belts) are mostly fragmented due the pressure of built-up areas.

In the case of the Poznań exemplar, nature-oriented playgrounds and “open gardens”, the issues of climate adaptation and sustainable use of resources are very much visible. We are focused on designing them according to “nature - oriented” rules that involve de-sealing of tarmac and introducing more diverse greenery, which enriches biodiversity and mitigates heat islands especially in densely urbanised areas of the city. Secondly, providing citizens with access to - up till date - restricted green spaces enables them to use it in their neighbourhood and saving on transportation to distant green locations.

The introduction of open gardens at preschools or other public institutions has an important role in the broader placemaking process. Cooperation between different stakeholders is necessary in the process of designing new ways of use for these green premises that are owned by public institutions (like kindergartens) and are to be partly opened for a wider group of users than normal. We have observed that the creation of aesthetic as well as functional spaces attracts a high degree of social activity, daily interactions and social gatherings – important factors in community wellbeing.

It has been observed that free, open access to the recreational areas improves social cohesion by providing opportunities especially for children and youth from low-income families, and low-income retired people. Organised sporting activities have a potential for reducing anti-social behaviour among young people.

The introduction of open gardens at preschools or other public institutions has an important role to strengthen social integration of communities as they participate in creation of common rules of conduct of such semi-open places and further involve in garden activities. All mentioned solutions are designed with a process of co-creation with local communities (including co-design, co-management, and decoration/furnishing, etc.).

Creating attractive nature-based solutions in the city centre (close to the historical centre of the city) is expected to increase tourist attractiveness. Regenerating centrally located green spaces (Warta river valley) has shown to increase flow of people in these areas and brought an interest in neighbouring areas that result in a collaborative desire to regenerate old, abandoned or neglected spaces. This is a vital factor in place-making. These improvements will attract new inhabitants. Improved districts are now becoming fashionable and many new business endeavours of local collaboration are emerging.

Poznań’s exemplar brings together activities carried out with Poznań kindergartens, and seeks to upscale them as a multifunctional NBS to address climate resilience, surface water management in the dense urban core and enhance community cohesion and access to nature. We focus on two types of actions:

The first action (nature - oriented playgrounds) promotes using of nature- based solutions (NBS) in architectural design and modernisation of playgrounds. It also enhances ecological knowledge of children and teachers and bring more biodiversity into green spaces of kindergarten’ premises. In the frame of Connecting Nature project, we add value to the regular programme of modernisation of kindergarten playgrounds in Poznań. We provide kindergartens that receive city budget money for modernisation works with a dedicated service of professional, nature-oriented architectural design of their playgrounds. Simultaneously, we are testing a pilot project of “open garden” by one of the selected kindergartens located in the densely urbanised district of Wilda. We have noticed that many public institutions in our city have very attractive green spaces that are accessible only for “usual users”. We assume that (at least) partial opening of such spaces to citizens who are usually restricted from coming to their premises is an innovative way of providing city dwellers with access to green spaces. However, such “open garden” project is a challenge from the very beginning - the very basic requirement is a certain openness and flexibility from the public institution and respect for rules of conduct defined by the users in the frame of co-creation process.

To summarize, the primary project, which is being scaled-up through the Connecting Nature project, is the nature-oriented playgrounds as it is moving from pilot size and from very experimental project to being delivered across the city during the Connecting Nature project. This is also a big desire of the Poznań team that in the future some of the nature-oriented playgrounds will become partly the open gardens for citizens.

Both nature-oriented playgrounds and “open garden” has proved by now to be very successful. Integrating a diversity of small-scale nature-based solutions (such as pockets parks or social gardens) into dense neighbourhoods will contribute to materialize a long-term vision of Poznań as a city of interconnected green spaces that reconcile high quality of life with sustainable infrastructures and the city’s rapid economic development.