Nature-based solutions are emerging as a key mechanism for renaturing cities, yet barriers around evidence and effectiveness still stand in the way of widespread rollout across our urban landscapes. More by luck than design, we learned that a straightforward technical test of a Sustainable Drainage System (SuDS) retrofit scheme in a social housing estate could provide an innovative mechanism for overcoming local authority and local community reticence towards nature-based solution SuDS. By literally creating a storm in a bioswale, we saw perceptions change through experiencing SuDs in action; securing community confidence and transforming a London borough’s approach towards managing stormwater with nature.

By engaging with residents during the rain simulation process, we were able to explain exactly why their Sustainable Drainage System had been installed and let them see how the system performed with a massive volume of water typical of an extreme rainfall event.

Nature-based solutions provide the potential to reconnect urban communities with nature and the broad array of ecosystem service benefits that nature can provide. Nature-based solutions are solutions that use nature and/or natural processes to simultaneously provide ecological, environmental, social, and economic benefits. Whilst consensus on an exact definition for nature-based solutions has yet to emerge, the evidence base in relation to the cost-effectiveness of such approaches has expanded and it would appear that our urban landscapes will be transforming in the coming years as nature-based solutions become a more widely adopted strategy globally (TNOC essays: 1, 2, 3, 4). 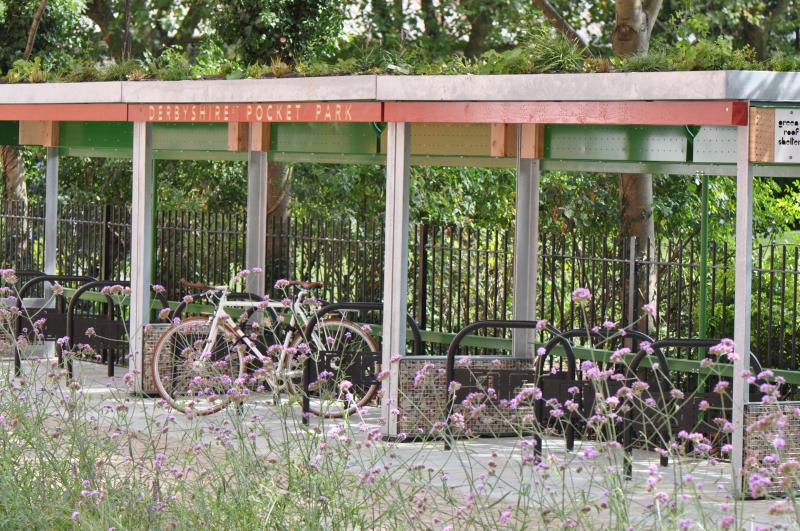 We are currently working on the EU Horizon 2020 project Connecting Nature. The project brings together researchers, industry, local authorities, local communities, and NGOs to create a community of cities that fosters peer-to-peer learning and capacity building. The aim of the project is to support cities in upscaling and out-scaling nature-based solutions, to move them from a situation where they are delivering innovative small-scale nature-based solution pilots, to one where nature-based solutions are delivered across the city and represent “business as usual”. 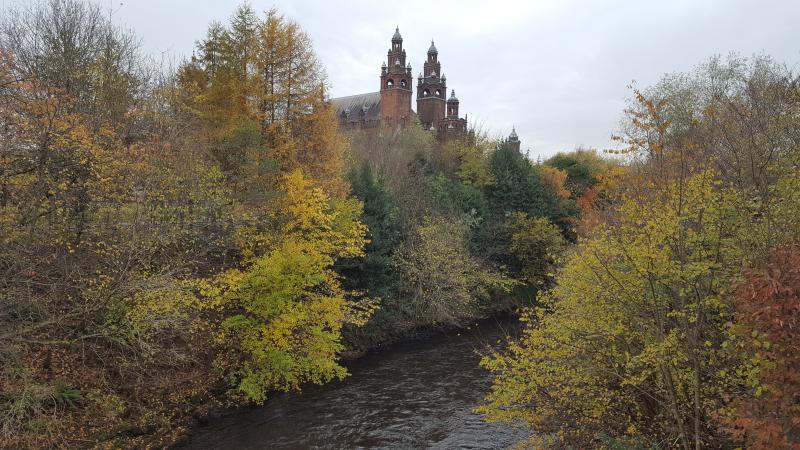 Figure 2. One of the Connecting Nature Cities, Glasgow (UK) working to implement nature-based solutions as a mechanism for enhancing the multifunctionality of their open spaces.

One of the key activities of Connecting Nature involves collaborative work with local authorities across a number of partner cities, exploring the barriers they encounter to nature-based solutions roll-out. This process revealed that different cities can face different challenges, generating a wide range of barriers that cover all aspects of nature-based solution implementation from finance and entrepreneurship, to governance and technical design. Encouragingly however, because this process established a peer-to-peer exchange between cities and practitioners, it transpired that barriers faced by one city were often a challenge that had already been addressed by another. Demonstrating the value of a co-creation approach, these exchanges identified that a range of innovative solutions were possible and that these merely need to be recognised and shared amongst practitioners to help them to unlock nature-based solutions barriers. It is an example of such an innovative solution to barriers that we share here. 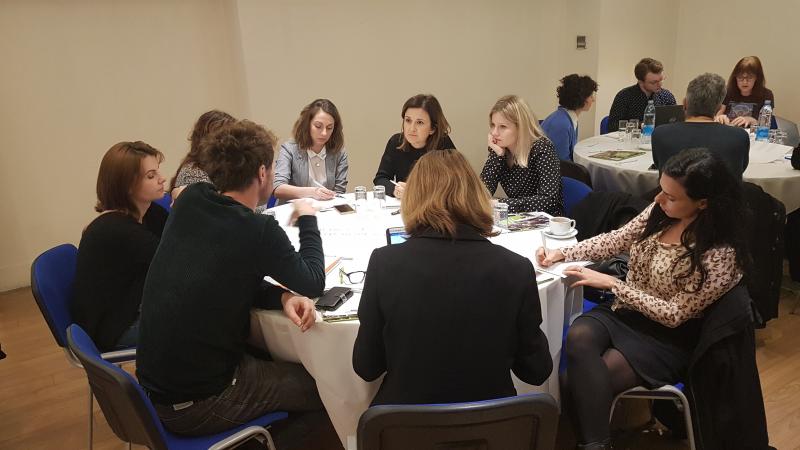 Figure 3. Connecting Nature peer-to-peer exchange. City officials from across the EU working together to explore barriers to upscaling and outscaling nature-based solutions.

The EU Life+ project Climate Proofing Social Housing Estates was a pioneering programme aiming to showcase a novel SuDS retrofit approach and demonstrate the multifunctional benefits it could provide. Led by Groundwork London, the project investigated whether nature-based solution SuDS could be cost-effectively retrofitted across three social housing estates in the London Borough of Hammersmith & Fulham in the UK. Our role in the project was to lead on delivering the monitoring of the project to assess the ecosystem service benefits of such an approach. A key part of this was monitoring a range of the SuDS features to assess their performance in terms of stormwater management. Various monitoring methods were adopted that included the use of weather stations, pressure sensors, and fixed-point cameras to quantify and qualify the rainfall capture and attenuation performance of the SuDS. These monitoring methods provided data to support the local authority in gaining confidence in the implementation of SuDS within the borough. However, of the monitoring methods implemented, by far the most effective for breaking down a range of barriers to nature-based solution implementation was also one of the simplest. This effectiveness was also a happy coincidence rather than an intended impact of the monitoring design: 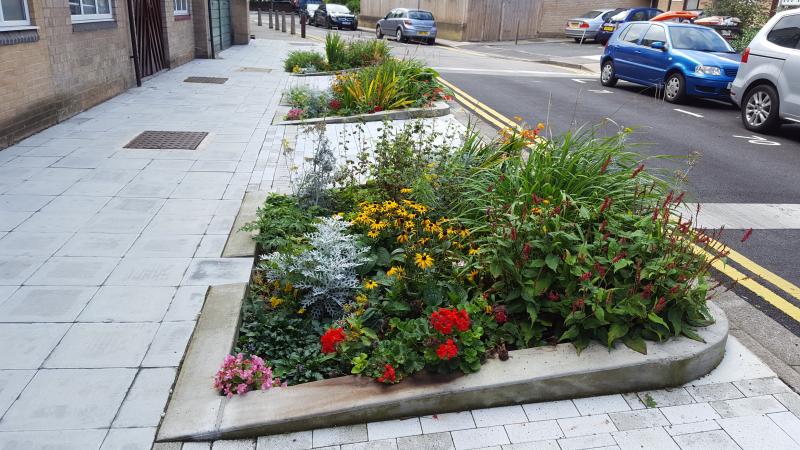 One of the key problems of monitoring in-situ SuDS features is that, in order to understand how they perform under extreme weather events, you have to wait for an extreme weather event to occur. Most SuDS features are designed to manage a specific sized weather event, for example a 1 in 10, 1 in 30, or 1 in 100-year rainfall event. By definition therefore, in order to monitor their as-designed performance, you might have to wait 100 years for an event of that magnitude. As if this is not enough of a challenge, field monitoring being the fickle thing that it is, you can almost guarantee that when that mega-event does finally occur, the battery will have gone on your pressure gauge and the data will be missed!

So, to try to avoid the vagaries of waiting for natural storm events, we decided to create a storm(!) and simulate our own extreme downpour. Checking through the literature, we found evidence that storm simulation had been trialled under laboratory conditions (Alfredo et al. 2010), but in-the-field testing had only been carried out on a small scale previously (Alves et al. 2014). So, it seemed like a fairly novel approach on the scale we were operating. The aim of the simulation was to mimic the rainfall magnitude to which the SuDS feature had been designed (1 in 100-year storm event) by inputting the volume of rain that would be expected to fall during a one hour storm event of the same magnitude. The volume was calculated by multiplying the depth of rainfall expected to fall during such an event by the as-built catchment area for each individual SuDS feature that was to be tested. The calculated volume of water was then to be gradually pumped into each SuDS element being tested over a one hour period. 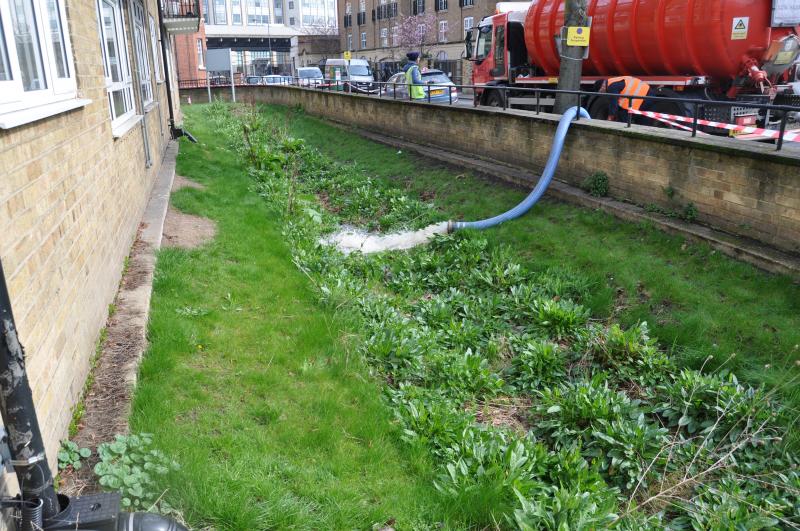 Figure 5. Storm simulation to test a nature-based solution SuDS feature. 10,000 litres of water were pumped in over an hour period to simulate a 1 in 100 year storm event

Depositing a 1 in 100-year storm event onto a real-life housing estate comes with a certain amount of anxiety… The night before the simulation was spent checking and rechecking calculations, nervous that 10,000 litres seemed like an awful lot of water and that some erroneous zeros in the wrong place could lead to way too much water flowing into the SuDS feature than we wanted! Fortunately, this fear proved to be completely unfounded and the storm simulation went very smoothly.

For the simulation, we used a bowser containing water collected from the outflow of a wastewater treatment centre so that there was no waste of mains water. As the 10,000 litres were pumped out, we used a selection of monitoring methodologies to assess the capacity of the SuDS feature and the control flow chamber (the chamber that releases water to the storm drain system if the feature is overloaded) to deal with this quantity of stormwater.

The simulation was a great success, with no exceedance of capacity and all standing water infiltrated into the ground within a mere 15 minutes of the end of the event. As the event was organised, in part, to help break down the nature-based solution barriers related to buy-in from different local authority departments, and confidence of local authorities in the guaranteed performance, local authority representatives were on site to observe the test, and it was videoed so that results could be shared. As this was the first attempt at simulating an in-situ storm event, the local authority representatives were the extent of the invited participants, as there was some nervousness about running such a simulation for the first time. However, this proved to be a missed opportunity in relation to breaking down further nature-based solution barriers. We wouldn’t learn the extent of this missed opportunity until our next storm simulation.

Buoyed by the success of the first rainfall simulation, for our next storm simulation at a series of rain gardens on another of the housing estates, we publicised the event more widely and some local residents joined us to watch the test in action. Unbeknownst to us at the time of planning, this proved to be an incredibly successful venture, specifically for solving one of the remaining barriers to nature-based solution rollout: public perception of nature-based solutions. 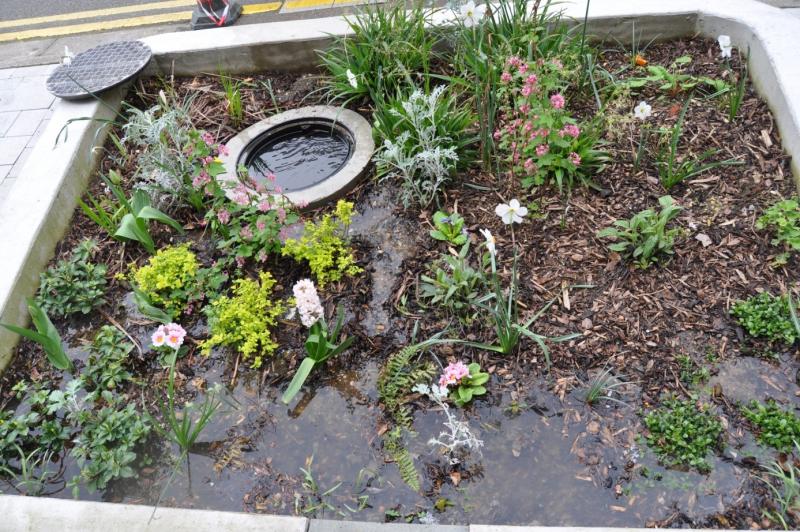 The development of the nature-based solution SuDS across the three estates had very much been carried out using a co-creation approach that incorporated the residents’ input. Nevertheless, as we discovered during conversations with residents at the start of the simulation, there were still lingering concerns and a lack of understanding about how and why their local open spaces had been changed. Of most value from these interactions, we learned an unexpected misconception held by residents: a sense of anxiety that their properties had been put at greater risk of flooding locally in order to reduce the risk of flooding and combined sewage overflow across London as a whole.

By engaging with residents during the rain simulation process, we were able to explain exactly why their SuDs had been installed and let them see how the system performed with a massive volume of water typical of an extreme rainfall event. At the end of the simulation, there was very positive feedback and residents informed us that their perceptions had changed completely. Most importantly, seeing the SuDs in action had assuaged their concerns regarding changes in water management across their open spaces.

Such was the success of this endeavour in building confidence in local authority planning teams and local community members, that we would recommend this type of hands-on demonstration in all nature-based solution SuDS retrofit projects (or at least until SuDS is more widely accepted). Overall, the project was such a success that the London Borough of Hammersmith & Fulham is leading the way in rolling out SuDS retrofit in London, including a much more substantial retrofit on the largest London housing estate in White City. A critical part of this success though was the potential effect of this kind of citizen-focused storm simulation on the local community. It was eye-opening to experience first-hand both the stress that a change in stormwater management had brought to local residents, and the subsequent change in perceptions by experiencing the SuDS in action.

Nature-based solutions are delivered through co-creative processes involving local community participation. The success of their legacy and wider uptake is dependent on both this co-creation approach to design and on community acceptance, understanding, and ownership. Citizen engagement delivered through this basic storm simulation testing proved to be an effective way to support this understanding. In so doing, it represents an excellent mechanism for changing both civic and community perceptions, promoting social acceptance, and removing barriers that currently prevent nature-based solution mainstreaming. 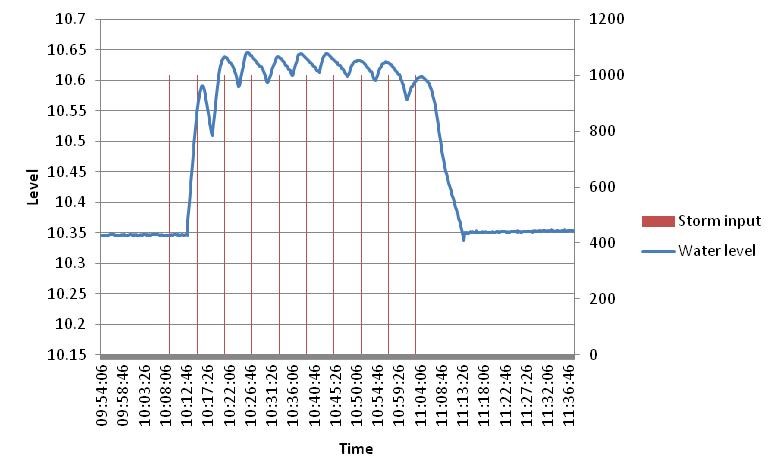 Figure 8. The performance of the Beatrice House nature-based solution SuDS feature under storm simulation conditions. The bars represent the input of 'stormwater', the blue line represents the water level in relation to the pressure sensor depth.

In order to develop this process further, the next step would be to capture the resident’s perceptions before and after the storm simulation in a more formal way, to quantify the effect in terms of reducing stress and increasing resident understanding. For now though, we look forward to the continued rollout of this type of nature-based solution and the continued opportunity to create storms in a bioswale. We encourage others to follow suit with this kind of hands-on demonstration, to actively engage communities in performance assessment, and to begin to break down the barriers to successful broader nature-based solutions rollout.

This essay originally appeared at The Nature of Cities : https://www.thenatureofcities.com/2019/12/16/a-storm-in-a-bioswale-breaking-down-barriers-to-nature-based-solutions/